Recent rains wreaking havoc on turtle nests, according to activist 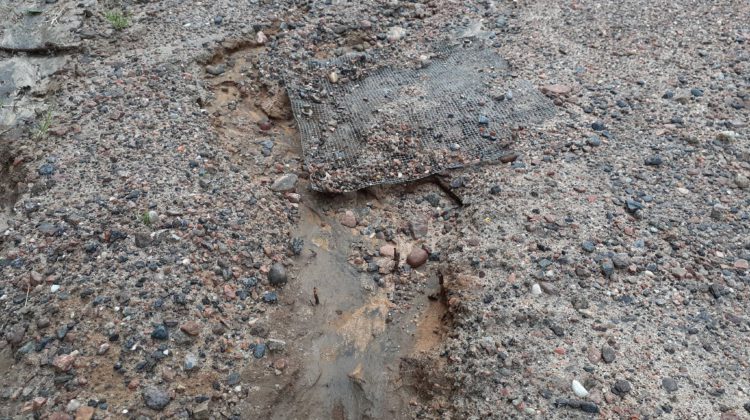 A washed out turtle nest with an enclosure (Photo Credit: Kelly Wallace)

The weather may be causing washouts on roads and hazy skies, but it is also having a profound effect on the Bancroft turtle population.

Kelly Wallace with the Think Turtle Conservation Initiative says with nesting seasons wrapping up, rains and temperature changes are showing the impact climate change can have on the population.

“It’s the human impact that’s causing the changing climate, the fluctuations in temperature and extreme weather,” she goes on to say.

Erosion has been so bad that Wallace and the team at the Initiative had to shore up some nests so they don’t break down and wash away.

This, combined with the extreme temperature fluctuations, plus hardened ground from dry summers past, has forced some turtles to abandon nesting grounds they may have held for years.

She says that many residents to have turtles nest in their backyards haven’t reported seeing them this year. “It’s not that there’s been any kind of mass mortality, it’s just simply the ground has been saturated and the temperatures have been all over the place,” she explains.

Wallace says that this trend has been repeating itself across the entire province. As bad as this might be, there are a few silver linings to the situation.

With turtles now hunting out new locations to nest in, Wallace says it is possible that they will nest on someone’s property.

If property owners find them, they can put down nest protectors with the help of the initiative and monitor them.

In addition, the rains may wash away the turtle’s scent so that predators like foxes and raccoons will have more difficulty finding them.

That, according to Wallace, is a good thing. “It means people will be there to keep an eye on them through the incubation period,” she says.

Now that nesting season is over, Wallace says there are a few things to keep an eye out for.

If you have a nest on your property, constantly keep an eye on it to make sure it’s safe.

With the summer heat, eggs could see incubate faster, and those with nests on their property should be aware they may see young turtles sooner than expected.

As for drivers, while you will see fewer turtles on the road, still be on the lookout for them.

With files from Trevor Smith-Millar and Mathew Reisler