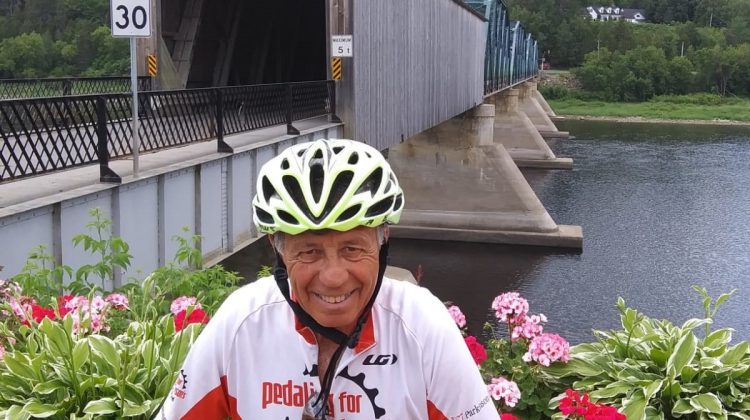 PARRY SOUND, ON – A cyclist’s trip across Canada is over, but the fundraising continues as he has only hit a quarter of his goal.

At 70-years-old, Walter Reich decided to bike across the country to raise money for Parkinson’s Disease. He began the trip on April 12 in Tofino B.C. on Vancouver Island.

Reich and his wife Regula are originally from Switzerland but have called Canada home for the past 24 years. They used to live in Magnetawan, about 60 km northeast of Parry Sound. Regula was with Walter the whole trip in their motorhome, giving him a break every 20 to 30 km.

“First of all, I wanted to see if I could do it,” Reich said. “Second is because I rode for Parkinson’s for a few years. I had to go across Canada anyway.”

He said people can still donate.

“We will leave it open for a while, for people who maybe forgot me and what I was doing,” Reich said jokingly. “So it’d be nice to just remind them again.”

Reich biked through Ontario along Highway 11 in mid June to stop into the town he used to call home.

Walter and Regula recently retired from owning the The Quiet Bay Log Motel & Café in Magnetawan.

Walter said he and Regula will stay in Newfoundland for a bit if the weather is nice but after that, everything is “up in the air.”

“Because we don’t have a permanent home,” Reich said. “Our RV is our home at the moment.”

Walter biked a total of over 8,000 km throughout his trip.