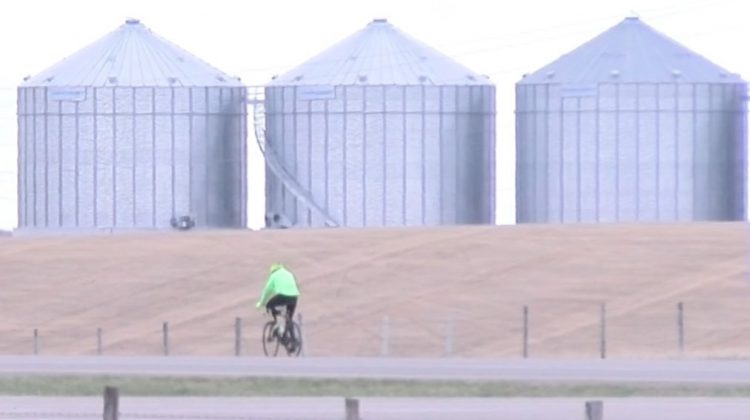 Walt Reich as he pedaled across the prairies. (Supplied by Walter Reich - GoFundMe)

A former Magnetawan resident has completed nearly 3,000 kilometres of a cross-country bike ride for charity.

Walter Reich, age 70, is about to cross into Ontario from Manitoba. He started his ride in Tofino, BC on Vancouver Island on April 12th. The over 5,000-kilometre ride is a fundraiser for Parkinson’s Disease. He wants to complete it by the fall but will be taking a break to attend a son’s wedding in his native Switzerland next month.

“The toughest thing is the headwind,” he admits. “It’s still cold. It’s near the end of May and you are still freezing on the bike.”

Going through Ontario will be a different challenge for Reich, as the prairies offered flat,  featureless terrain with lots of wind. He will be taking Highway 11 through Fort Frances and Thunderbay.

“It’s more straight and it’s not that windy,” he says.

Reich’s support driver, wife Regula, has been driving their motorhome providing him shelter every 20 to 30 km.

“Driving has been good so far,” she says, before adding, “the roads in Manitoba have been the worst.”

In terms of the reception they have been getting Regula says it has been fantastic.

“We have been treated very generously especially by a lot of campground owners,” she says. They have been offering up free nights to park their camper, saving the fundraising effort money.

The couple is looking forward to getting closer to home and will be spending a few days in Magnetawan next month.

Walt and Regula were longtime owners of the  Quiet Bay Motel in the small Almaguin Highlands town. Now in retirement, the ride has been a focus, which included a few months of training in California prior to the start of the ride last month.

They are hoping to raise $50,000 for Parkinson’s research through a GoFundMe page. They are a bit light on donations so far but feel that summer weather will improve the giving.