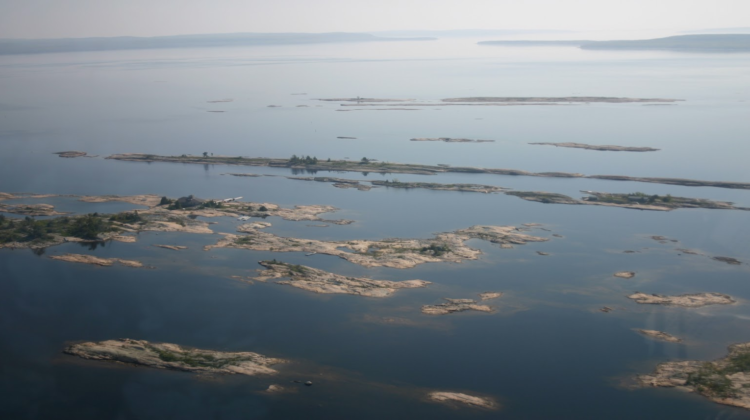 A former Premier could soon be honoured with an education centre in his name, located in one of his favourite places.

The William Grenville Davis Education Centre for the Great Lakes, named after the late Bill Davis who served as Premier from 1971 to 1985, is currently just an idea.

District of Muskoka Council approved its half of a $15,000 feasibility study with a unanimous vote Monday, before which several councillors voiced their full support for the concept. The other half will come from Georgian Bay, whose council approved the funds last week.

The proposed centre would serve as a satellite research campus for potentially multiple universities and colleges, according to Peter Cooper, a Georgian Bay and District Councillor, as well as a cousin to Davis. Cooper says it would be ideally located for hands-on learning on Georgian Bay, which houses a United Nations Educational, Scientific and Cultural Organization (UNESCO) Biosphere Reserve.

“We see it very much as an experiential kind of education, as opposed to just lecture hall education,” says Cooper. “There will be vessels there for the students to go out and work on Georgian Bay. Particularly, the eastern shores of Georgian Bay have probably the most significant wetlands in Canada, and probably North America, so there’s a lot to study.”

The proposed site is a donated piece of “significant waterfront property” in Honey Harbour, according to Cooper. The building would also include a visitors centre with educational resources about the geology and biology of the area.

According to Cooper, the idea of a centre honouring Davis has been in the works for five or six years but never gained much traction. After Davis passed away in August, Cooper says interest in the idea “resurrected itself rather quickly.”

As Minister of Education, Davis was instrumental in the creation of Ontario’s community colleges as well as expanding the university network, and as premier was responsible for creating the Ministry of the Environment, according to Cooper.

“Premier Davis would have been thrilled to know that an educational institution on his favourite part of Georgian Bay would be considered,” says Cooper. “So that’s why we sort of went after this again, the first step of which is to have a feasibility study.”

Cooper says the study will focus on finding interest and potential partnerships with educational institutions, corporations, and government ministries, as well as logistical information on cost, timeline, and potential leadership.

Cooper says there’s already been some interest within McMaster University and Mohawk College, with Dr. Pat Chow-Fraser, an ecology professor at McMaster offering to help with the centre’s curriculum, and Dr. Nick Eyles, a geology professor at the University of Toronto, also interested in being involved.

He says the feasibility study will likely come back to council by January or February, and if all goes well, construction could begin as early as fall of 2022.