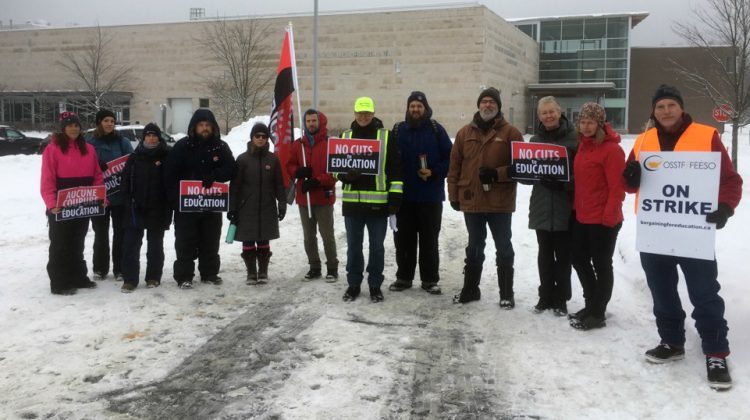 PARRY SOUND, ON-The OSSTF is set to start a new rotation of school strikes every Wednesday until discussions have ceased.

The OSSTF announced last week that they will be starting rotation of one-day school strikes until the discussions have reached an outcome that benefits education staff.

In an interview with the MyParrySoundNow.com newsroom, President of the OSSTF Harvey Bischof said that the duration of the strikes and how far they are willing to go depends on the government. “We want to reach an agreement that benefits our teachers and support staff but those at the bargaining table are making it difficult,” said Bischof.

A recent press release quoted Nipissing MPP Vic Fedeli saying that the OSSTF “has not put any forward changes to their proposal, no as of this time, proposed any new dates to return to the bargaining table.”

Fedeli went on to mention how the OSSTF insists on maintaining their “$1.5 billion compensation, including pay and benefits.”

Bischof says that what Fedeli mentioned is inaccurate and wrong, “first off, we have made moves to alter the agreement to make it seem reasonable and we are not asking for $1.5 billion, we are asking for significantly less, $200 million.”

When asked about the flexibility and drive to end the striking in the government’s side, Bischof said that they have not been dealing with Premier Doug Ford or the Minister of Education Stephen Lecce. “We have only been dealing with their lawyers while Ford and the Minister seem to be absent from the conversations,” said Bischof.

Bischof went on to say that the union is displeased with the push for e-learning when there is no given proof that it helps students learn. “The fact that it is mandatory for two classes with no evidence that it benefits the students, is unacceptable,” said Bischof.

Bischof wanted to clarify that while he does not dismiss e-learning as a learning tactic, the OSSTF wants to sit down with the government to discuss how they could use it more effectively because right now, “the government is using them like guinea pigs.”

“Across Ontario, we have seen several hundred teachers lose their jobs and the class sizes are growing to a point that it is hard to manage,” said Bischof.

He continued by saying that even though the government sticks to this idea that they are helping students by making cuts to education, “considering education benefits Ontario’s future, this seems very short-sighted.”

Fedeli ended his address by mentioning that “our job is to fight for your children. For investment in their classrooms, in their schools, and in their future.” When bringing this up to Bischof, he said that this statement is flagrantly wrong. “They cut student funding, they have cut support staff, they have cut teachers, and they cannot legitimately claim under those circumstances to be defending the quality of education.”