#PSsignwars on day four and counting 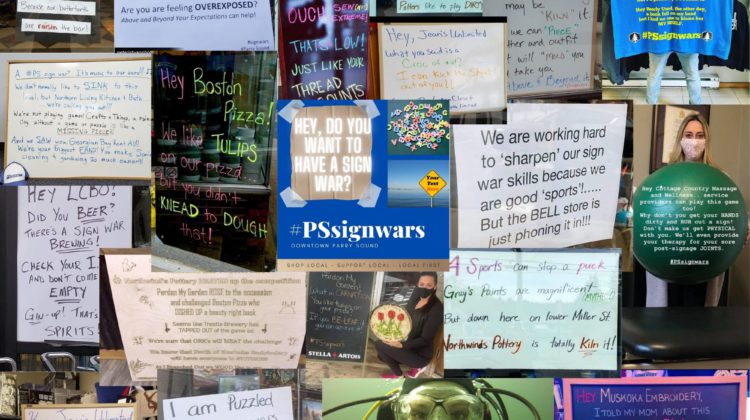 Parry Sound has been the site of a fierce war the past two days, a sign war that is.

The Sign Wars that have been popping in towns all over Ontario have finally reached our neck of the woods.

You’ve likely noticed the fun trend of sign wars happening around the country, and we’d like to initiate this in Parry…

Posted by Parry Sound Downtown on Saturday, May 1, 2021

The DBA invited everyone in the area “to grab a whiteboard, bristol board sign or whatever works on your end and let the friendly battle begin!”

DBA spokesperson April Denman told the My Parry Sound Now newsroom it all started when she saw the sign wars last week just outside her hometown.

“I said – Oh we have to do this, this would be so great, downtown needs this, it’s so fun,” April said.

Denman and her Social Media Manager were first a little on the fence because everyone is already dealing with so much she said.

However, after a member reached out to them saying they’ll start it in Parry Sound the decision was made easy.

What followed was over 20 businesses or individuals putting up signs, and posting photos of them going after each other in the funniest of ways.

“They(the signs) are incredible!” Denman said, “it was really funny to see who was going after whom, there are some relationships that I guess we did not even know about, it’s just so much fun,” 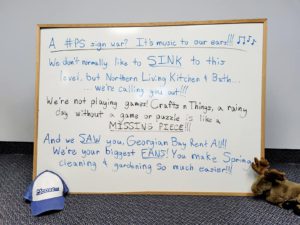 Moose 103,3 was even pulled into the fight by Georgian Bay Rent-All, and of course, we all know that no moose in Canada backs down for a fight;

“I think it’s a testament to what is needed right now,” she said, “Everybody is still in lockdown and nobody knows what’s happening and everything’s kind of Doom and Gloom with the news, and bad numbers […] I think this shows that people are really craving something to support their own town,” 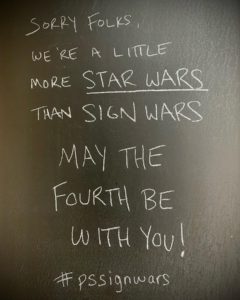 And it wasn’t only downtown Denman said, “we pulled in businesses from 10-15 minutes outside of town one way and 40 minutes another way so it’s really good that it’s kind of like a whole Community thing that’s happened with us,”

The #PSsignwars are open to all the area’s residents, businesses and service providers.

To enter, you will need a sign of any kind, put a friendly and appropriate message on it, take a photo of it and post it to social media with the #PSsignwars.

And to be fair, Northern Living Kitchen & Bath was not quite when called upon;