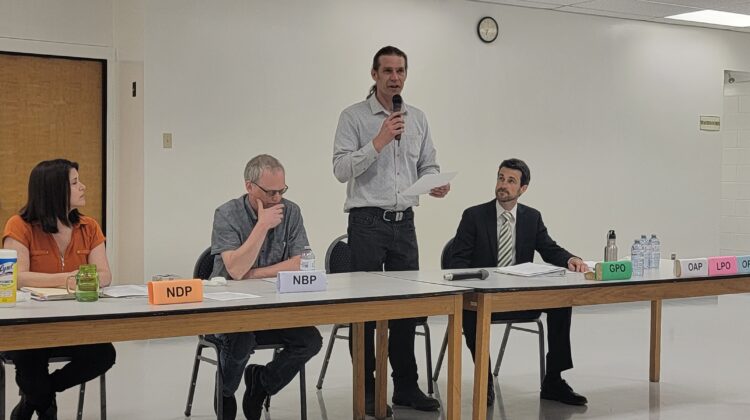 The first all candidates forum for the provincial election featured only three of the seven candidates in the running to represent Parry Sound-Muskoka.

It was hosted by the Retired Teachers of Ontario District 6 with the questions focused on East Parry Sound.

While all candidates were invited, only the NDP’s Erin Horvath, Matt Richter of the Green Party, and the New Blue Party’s Doug Maynard took part. There were about 50 people who showed up at the Sundridge Joly Strong Arena.

Affordability was the main focus of the night.

The first question posed to candidates was how they would solve the housing issue the riding – and much of Ontario – is dealing with.

Richter said that in his 15 years as a candidate for the Greens, the affordable housing issue has continued to get worse. He touted his party’s plan to build 100,000 permanently affordable units over the next decade. He said his party will also cut down on speculation, noting that 30-percent of homes sold in the Greater Toronto Area were bought by people who already owned two or more houses.

Maynard said that the latest Canadian census results show the population is rising, yet the number of occupied dwellings still outpaces it. He promised that, if elected, his party would reduce red tape and cut the various fees developers have to pay to build. “They’re just passing that onto the buyers,” he said.

Horvath said that the challenge is housing is being built but “not for regular people.” She explained that big houses and cottages are not what is needed.

She pointed out that for businesses to grow, housing is needed. “The housing crisis is a small business crisis,” Horvath said. She added that a “variety” of homes need to be built. “Houses for many different types of people,” she said, explaining that includes duplexes, triplexes, tiny homes, and basement suites.

Candidates were also asked about long-term care and what they see as the main issue that sector is dealing with.

“Even before COVID hit us our long-term care issues were out of hand,” Maynard said. “The pandemic really just highlighted that.”

He said that with the vaccine mandates imposed on workers, it caused people to lose their jobs. That, in turn, put more stress on the shoulders of people who kept theirs. Maynard said the New Blues would make sure the people who lost their jobs because of mandates would be offered them back.

Horvath touted the NDP’s eight-year plan to end for-profit long-term care, adding personal support workers would see a minimum $5 an hour raise from what their pre-pandemic wage was. “We need to invest in the care we need,” she said.

“What we saw over the past two years was just a travesty,” Richter said, adding the system was designed to fail because of chronic underfunding.

Currently, two other all candidates forums are scheduled for Parry Sound-Muskoka. One will be hosted by YourTV Muskoka and the other will be handled jointly by Muskoka’s Chambers of Commerce.