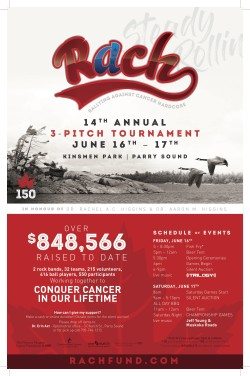 The RACH Pitch Tournament is another step closer to raising $1 million for cancer research.
The annual three-pitch softball tournament took place on June 16 and 17. According to Joanne Higgins, a key organizer for the event, the tournament raised over $90,000 this year. She adds that donations are still coming in.

The tournament was started by Rachel Higgins to help Dr. Jonathan Irish and his cancer research. Dr. Irish helped Rachel during her cancer treatment. She lost her fight with cancer in 2005.

The tournament is still run in her honour. Her brother Aaron, a doctor in the community, also lost his fight with cancer a year ago.

The tournament took place in Kinsmen park. Higgins says she’s very grateful for the strong community response from Parry Sound. She adds that she is looking forward to crossing the $1 million milestone, which will happen next year as long as things go to plan.