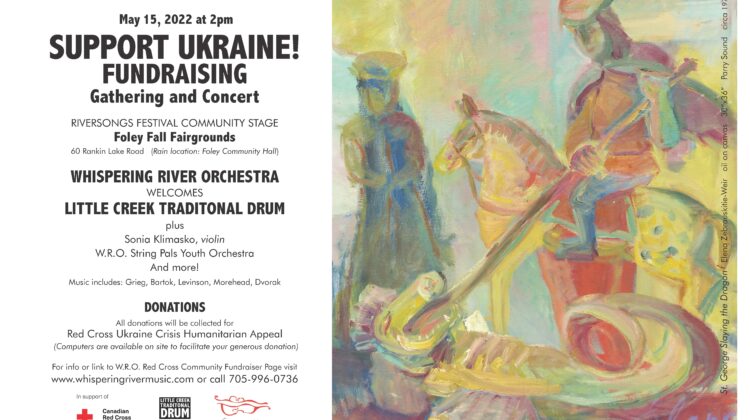 Whispering River Music (WRM) is throwing a concert and gathering to raise funds in support of Ukraine.

The event kicks off Sunday at 2 PM at the Foley Fairgrounds with tickets and donation information found at whisperingrivermusic.com or by calling 705-996-0736. The money raised will go to the Red Cross Ukraine Crisis Humanitarian Appeal.

According to WRM’s website, the event will feature music by Grieg, Bartok, Levinson, Morehead, and Dvorak, resident musicians Brenda Muller, Zach Louch, and Katja Mathys, with a special solo by concertmaster Sonia Klimasko who is a third-generation Canadian Ukrainian.

“They are by composers who come from countries who have had to deal in a very real way with invasions or nuclear war,” said Muller, “and who understand as our First Nations involved in this concert do, the need to resist colonialism and the wars caused by the greed of one country to have access to the resources of another,”