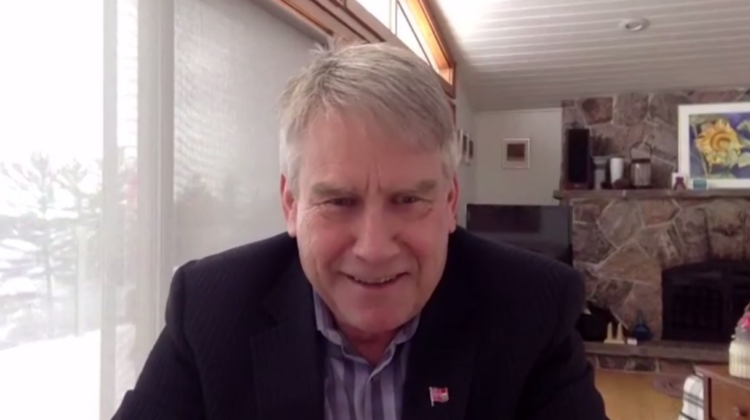 Norm Miller on a virtual announcement in January (Screenshot via Zoom)

As the provincial election ramps up, Parry Sound-Muskoka’s longtime MPP is ramping down for retirement.

Norm Miller’s last official day in office was May 3, having been the riding’s provincial representative since the 2001 by-election.

“I must admit, I do have some mixed feelings. I’m looking forward to having more freedom, and being able to do some things that just take more time than you have when you’re MPP,” says Miller. “But it’s been a real honour and privilege to be the MPP the past 21 years, and to represent the people of Parry Sound-Muskoka, and to get to know [them] a lot better over the past number of years.”

Miller has often cited his late father, former Premier and longtime MPP Frank Miller, as his inspiration for going into politics. He says he hopes his father would be proud of what he’s been able to accomplish, as he is certainly proud of his father.

Over the past two decades, Miller says he’s done his best to bring local issues to Queen’s Park. fielding 27 private members bills by his count. That includes paved highway shoulders for cyclists, more affordable snow plow insurance, and keeping styrofoam out of bodies of water, among other matters.

More recently, he says he’s happy to cap off his career with the announcement that Muskoka’s two hospitals will be redeveloped, and to watch Parry Sound move closer to having an Ontario Health Team, expand its airport, and build a pool complex.

According to Miller, the region has changed “quite a lot” since he took office, but hasn’t lost its character.

“There has been a lot of development, but the area’s best assets are still its beautiful lakes and rivers, geography, et cetera, and that has been maintained, which I think is important,” says Miller.

Coming out of the COVID-19 pandemic, Miller says he thinks Parry Sound-Muskoka is in a good place to bounce back.

“There are challenges involved in making that happen, [such as] a need for skilled workers. Housing is another big challenge that is tied directly to that,” says Miller. “But I think there are those opportunities, and I think we’re in a good position to move forward and see development in a positive way that helps provide jobs for people and maintains the beauty of our riding.”

Of regrets, Miller says he wishes he could have spent more time in government rather than opposition, having backed former Ontario Progressive Conservative leader and current Mayor of Toronto John Tory in his 2007 bid for Premier of Ontario. “I think he should have been Premier of the province a number of years ago, and unfortunately it did not work out that way,” he says.

As for what’s next, Miller says he plans to spend more time with family, and get in some long awaited travel abroad– namely, to England for his daughter’s wedding, and to New Zealand to visit relatives and friends.

“I think we’ll let the dust settle [about] a year after retirement, and then see whether I think it’s great or whether I’m bored and think I should be doing something,” he jokes.