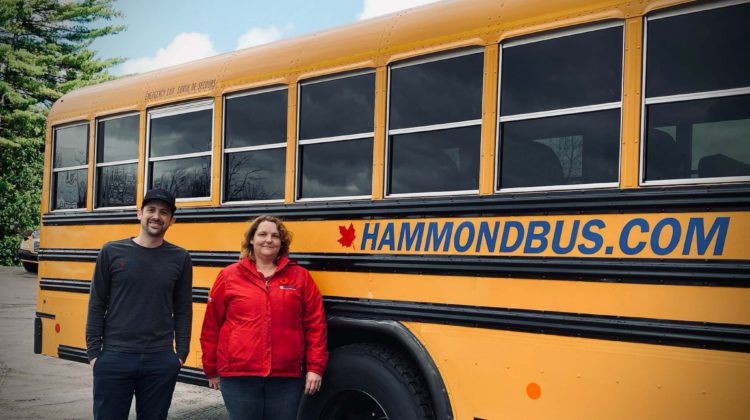 Kent Hammond, Manager, and Sharon Edwards, bus driver, with one of the newly-rebranded buses (Supplied by Greg Hammond, Hammondbus.com)

Local bus company Hammond Transportation is getting a new name and logo. Starting this week, it will be known as Hammondbus.com.

The company got its start as “Hammond’s Taxi,” founded by Orvil Hammond in 1944. Over the next two decades, the company added different types of vehicle to its fleet and expanded its services, eventually incorporating as “Hammond Transportation” in 1967.

Although the name has stayed the same, the business dropped or sold many of its services starting in the 1970s to focus on busing. Greg Hammond, Orvil’s youngest son and current President of the company, says it’s caused some confusion.

“It’s been 50 years since my father sold his trucking business to his brother, and every day we still get trucking inquiries and trucking contacts,” says Hammond. “People I’ve known all my life see me on the street and ask how the trucking business is, so obviously a lot of people still think we’re doing something we haven’t done for 50 years.”

He adds that the timing seemed right.

“It was a good time to look to a name that clarifies what we do a little more specifically and still identifies with our Hammond family,” says Hammond. “We [think] it’s the right time for a change, and that it reflects the 2020s with the website right in our name.”

It won’t be the only rebranding for the family. Muskoka Travel Service, founded in the 70s as part of Hammond’s but now a standalone business, will now be known as Hammond Tours and Travel. Hammond says that change is also meant to get rid of confusion.

“When it started out in the 1970s it was a Muskoka-wide business, but we’ve grown beyond that and our clientele comes from all over central Ontario,” says Hammond. “Many people thought that we were a travel company that specialized in travel to Muskoka, which really wasn’t our niche.”

Although both companies have gone through legal name changes, you’ll still see the old logos around for some time. Hammond says the first few vehicles have already had the new decals applied, but he estimates it will take two to three years to rebrand the entire fleet.