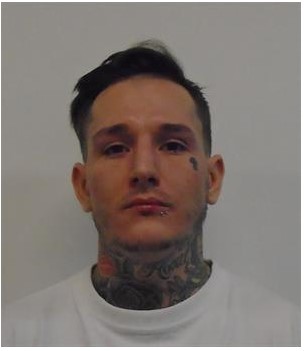 The OPP says its Repeat Offender Enforcement Squad (ROPE) is asking for the public’s help in locating 32-year-old Jordan Welch.

He has a number of tattoos including the word ‘VOID’ written in red on the back of his neck, Ben Franklin on the left side of his neck, a woman’s face and a rose on his right arm, a dollar sign on his right hand, a dragon on his left upper arm, his last name on his upper back and a teardrop under his left eye.

Welch is currently serving a sentence of just over 2-years for breaking and entering, two counts of theft and two counts of possession of property obtained by crime.

He is known to frequent Parry Sound, Orillia, Sudbury, Midland, Barrie and Toronto.