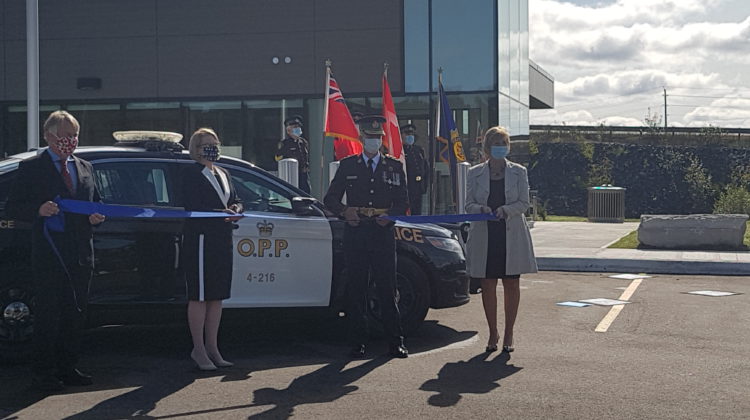 The West Parry Sound O.P.P. now has a new home.

The new detachment building was officially opened on Friday with local and provincial dignitaries on hand including local municipal leaders, Ontario’s Solicitor General, the OPP Commissioner and the Minister of Infrastructure.

The new building at 1 North Road is a 17,000 square foot, state of the art facility that features 5 holding cells, the latest in forensic capabilities, facilities to securely hold evidence, closed circuit TV as well as housing for Victim Services.

In her remarks Ontario Solicitor General, Sylvia Jones said that “strong and efficient policing is a critical foundation for insuring our communities are safe, healthy and confident to pursue opportunities to grow”, adding that when families and businesses are making important life and investment decisions that they need to know their future is safe and secure”.

OPP Commissioner Thomas Carrique noted that the OPP has been providing policing services in the area since 1989 and that today is also about recognizing 30 years of policing excellence. He noted that the West Parry Sound OPP serve ten communities with a population of just over 19,000 that expands to over 100,000 in the summer and that the detachment responds to some 11,000 calls for service each year.

Parry Sound Muskoka MPP Norm Miller said that the new detachment and its proximity to the 400 will allow officers greater ease to patrol the highway and access the other communities they serve and give them access to the most up to date technology.

In her opening remarks to welcome the invited to the gathering, acting Detachment Commander Staff Sergeant Carolle Dionne both congratulated and thanked local OPP members for their work in getting everything moved from the old Bay Street location in a matter of days.

The $20 million facility is part of a 2018 announcement of $182 million to replace several aging detachment facilities across the Province.