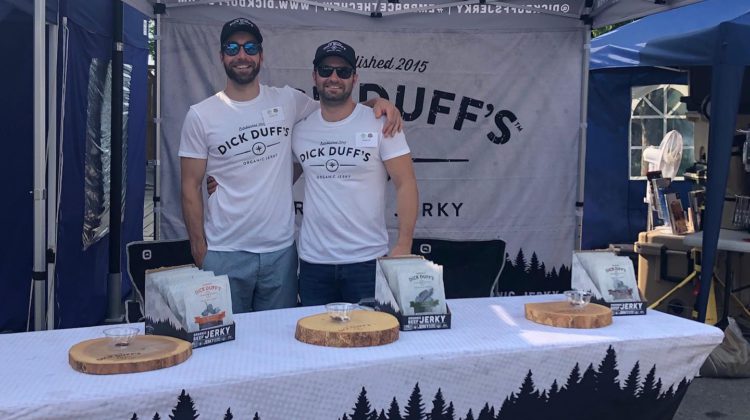 Business is booming for a pair of Parry Sound entrepreneurs and the co-founders of Dick Duff’s Organic Jerky.

Brothers Jonathan and Jeremy Anderson launched the jerky company in July 2019 after Parry Sound-based jerky legend Dick Duff partnered with them to sell his famous recipe.

When COVID-19 hit, it took a toll on the company – as it relied on trade shows and in-store demonstrations and they decided to shift their focus to online avenues.

In an interview with MyParrySoundNow, Jeremy explains how their transition online greatly benefited the company’s growth.

“We had to get creative with how to reach new consumers. So, through social media, working with online grocery stores, beer partnerships, gift baskets, giveaways – that sort of thing. We really had to figure out a number of ways to reach consumers.”

The brothers have known Dick since they were kids when the jerky legend’s home operation was in full swing in the 1990s.

Jonathan says ever since that time, they’ve had a passion and a love for the product.

“We actually knew Dick because our dad was one of his customers, and our dad was getting angry at us for eating all his jerky,” Anderson explained. “So, we approached Dick about commercializing his jerky and taking it to the masses just because we loved it so much.”

The brothers also had a reputation to uphold, and despite the pandemic – they’ve been able to push through to further Dick’s legacy.

Since the pandemic began, Dick Duff’s online sales has grown exponentially, with the duo selling 15 times more jerky virtually than in February of this year.

Jeremy notes that while navigating the online marketplace was the easy part – the difficult part was perfecting the recipe.

“Our biggest challenge was figuring out how to replicate Dick’s homemade quality on the commercial level. We worked with food scientists and product developers across North America to figure out how we could replicate that and bring the same great quality that people have come to know and love.”

Based on the advice they received from a mentor, the brothers looked at the pandemic as a learning opportunity for their business and for them – that meant adapting to various online sales opportunities.

Jonathan that the company prides itself on its product being clean, sustainable and ethically sourced.

“We’re not the run of the mill jerky. We have twice the amount of protein, half the salt, quarter the amount of sugar. So, we are a keto-friendly snack that you can take out on the trail, have in the bottom of your canoe while you’re fishing or anything like that.”

To learn more about the company’s story, you can check out Dick Duff’s website.

You can listen to the full interview below: