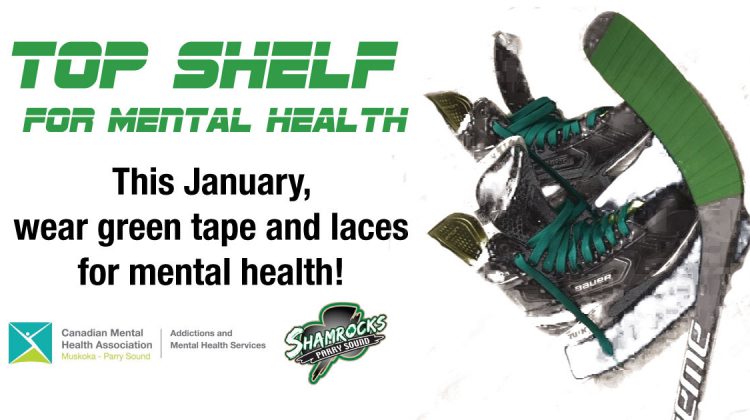 PARRY SOUND, ON-The Shamrocks are going to be sporting a new green colour in support of mental health.

In an interview with the MyParrySoundNow.com newsroom, one of the organizers of Top Shelf Tim McWhirter said that this event is very important to him as it is in support of his brother-in-law Dr. Rob Stevens, who lost his battle with mental illness in December of 2017.

“Our message is that it is okay to not be okay,” said McWhirter.

McWhirter said that they would like to keep talks going about mental health as it is something that affects about one in five Canadians. “There are a lot of people who experience mental health problems and keeping talks going will bring more attention to the issue,” said McWhirter.

He said that after doing his research looking into the Canadian Mental Health Association (CMHA), Canada’s youth suicide rate is the third-highest in the industrialized world and that the third Monday of January is claimed to be the most depressing day of the year and is referred to as Blue Monday.

“I believe that this is because of all of the people calling support services asking for help,” said McWhirter

McWhirter said that he approached the Shamrocks with his idea of wearing green to show their support for mental health. “We offered to purchase the equipment so now they will have green hockey tape and green laces for their skates.

McWhirter continued by saying that there is a reason why they chose to do this event at this time of the year. This past September was national suicide awareness day, mental health awareness campaigns happen in October and January 29th is the 10th annual Bell Lat’s Talk initiative, which brings attention to mental health issues. “We want to keep the conversations going all year round,” said McWhirter.

The event will carry on all month long and hockey goers are encouraged to wear green themselves to show their support.

McWhirter said that they hope to keep this tradition going for years to come and perhaps that they will change the format in which they may do donations.

“For now we are proud to wear green and show our support for mental health.”

The Top Shelf for Mental Health ceremonial puck drop will be launching on January 3rd at 7 p.m. before the Shamrock Midget game.