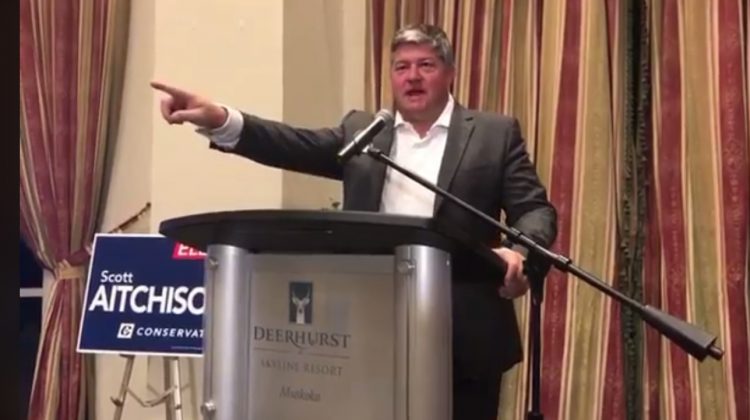 HUNTSVILLE, ON- Huntsville will need a new mayor.

With the 2019 federal election result finished, Conservative candidate and current Huntsville mayor Scott Aitchison has won the riding of Parry Sound-Muskoka. He won with a total of roughly 21,728 votes, ahead of second-place Liberal candidate Trisha Cowie’s 15,716.

Aitchison spoke about his win with the MyMuskokaNow.com newsroom shortly before giving his victory speech at Deerhurst Resort. He said he was excited about the opportunity given to him by voters in the riding, humbled by the work of his volunteers, and humbled by the people who wanted to give him a try.

He intends to chair a final meeting of Huntsville town council this coming Monday, and plans to resigns publicly. He’ll aim to vacate the mayor’s chair as soon as possible, though joked he still needs to clean out his office.

As for whether or not he expected the win, Aitchison indicated he was optimistic after hearing support around the riding during the campaign.

“But you don’t take anything for granted,” said Aitchison.

“We kept working hard to the very end, and the results are what we were hoping for.”

He is concerned about the national result, which will see a minority Liberal government in Ottawa. He suspected that minority government will be “propped up” by the NDP.

“So, I’m concerned with the nation’s finances, and I think it’s important for all Conservatives to try to make sure the message is very loud and clear that investments in Canadians are important, but we can’t do it at the expense of future generations.”

As for how his replacement in the mayor’s seat will be found, he had “no doubt” that council will make the best decision. He said they’re a collaborative and collegial group.

“I have no doubt that they will have a great discussion about what to do next, and whatever decision they make will be a good one, and good for the people of Huntsville,” said Aitchison.

The rough turnout for voter turnout in the riding was roughly 51,993 of 82,930 registered electors or 62.7 per cent of the voters in the riding. Aitchison did want to see more people come out next time.

“It would be nice to see more people get out and vote,” said Aitchison.

“It’s an honour and a privilege to exercise your right. I would like to see more always, obviously.”