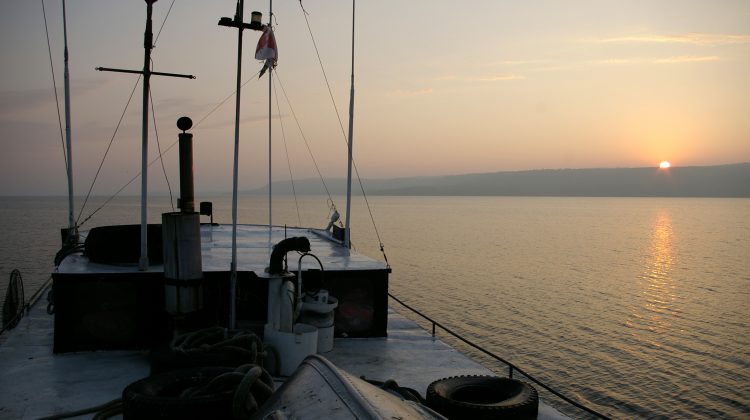 A photo of the fishing boat for B Lepage Fisheries, submitted by the company.

NOBEL, ON- Sandra Lepage doesn’t know where to turn.

Lepage is the CEO of B Lepage Fishery, running office operations for her husband’s fishery operation. The couple live in Nobel, near Parry Sound, and have been fishing Georgian Bay for the past 20 years.

Their main areas of operation are in two zones, one off of Midland and Thunder Beach and the other off of Collingwood and Wasaga Beach. The money they make from their fall catch provides their income throughout the winter, and goes to paying their employees on the boat and in their Nobel store.

However, their catch has been massively reduced this year, after a decision by the provincial government to close down the fishing area near Collingwood.

In a letter sent to the couple by Upper Great Lakes Management Unit Manager Ken Lacroix, the closure of the fishing area for lake trout and lake whitefish is laid out from the start of October to the end of December.

All commercial fishing for those fish in that area is prohibited during that time, due to concerns about a possible “invisible collapse” of the species. 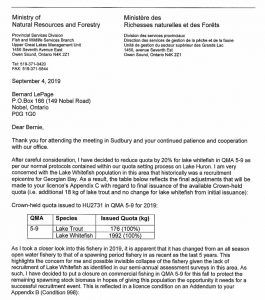 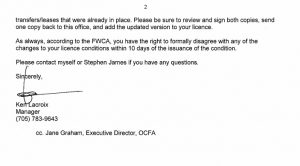 With that decision, Lepage is trying to figure out what to do next. She’s also extremely frustrated with the agency.

“There is no documentation to verify what he’s saying,” said Lepage.

“I feel like he’s doing it on feelings, their biologists are paid by them. I’d like to have a biologist that’s independent, because it’s like the tobacco companies, They can make the surveys do whatever they want, so I don’t believe what he’s saying.”

As for whether or not they had seen any signs of a collapse, Lepage said her husband had always caught his quota without any difficulties.

She isn’t sure of the exact financial impact yet, but said they would usually make $50,000 with good catches during the fall. She’s hopeful the province will either compensate them for the loss of income, or re-open the area.

“Open it again, or give us compensation, because they waited to the last minute to give us this information,” said Lepage.

“They waited until September 6th, there was no way for us to reroute what we were doing. It was just hit, like a ton of bricks.”

The MyParrySoundNow.com newsroom approached the province for comment on the matter.

Asked for how businesses could seek compensation, Ministry of Natural Resources and Forestry (MNRF) spokesperson Jolanta Kowalski said that the ministry supports commercial fishing, and manages fisheries to ensure populations and the businesses that rely on them remain sustainable.

“Unfortunately, exceptional circumstances have led the ministry to close a particular area of Nottawasaga Bay to commercial fishing for the period of October 1, 2019 to December 31, 2019 to protect the remaining adult spawning group of Lake Whitefish in this area of Georgian Bay,” said Kowalski.

As for how significant the concerns were for the fishery’s possible collapse, Kowalski said that lake whitefish usually congregate in the fall to spawn, dispersing over wider areas afterwards.

Nottawasaga Bay is an epicentre of the spawn, supporting some of the highest catch rates for whitefish across the lake fishery. The fishery depends on the species ability to renew itself through both successful spawning and growth to harvestable sizes.

“However, since the early 2000s, there have been drastic declines in recruitment of young fish as noted in ministry fisheries assessment projects and through regular monitoring of the commercial catch in this particular area,” said Kowalski.

“This has led to an ageing population and significant reductions in overall abundance of Lake Whitefish in Nottawasaga Bay.  With these reductions in abundance, the commercial fishery’s ability to catch Lake Whitefish in this area outside of the spawning season has declined because there are fewer fish and they are less frequently encountered over the wide area they occupy outside of the spawning season.”

Kowalski said the fishery has become dependent on fishing during the spawning period, targeting the remaining aging population of whitefish when they’re in the spawning grounds.

“In an effort to sustain the fishery into the future and protect those older, mature spawning adults, the MNRF has imposed a prohibition of commercial fishing in the fall when these fish are congregated and spawning in anticipation of igniting strong recruitment,” said Kowalski.

“This will also prevent the only remaining segment of the population from being overfished.”

Research is being conducted on the declines of the fish across Lake Huron and Lake Michigan, as well as the impact of invasive mussels and their impacts on the food web.

Asked if the fishery will re-open in the near future, Kowalski said that changes to the fishery and quota depend on the status of the fish population. Recovery may be slow, given the current status and concerns.

As for next fall, analysis on the fish population still needs to be conducted.

“In collaboration and consultation with industry, commercial fishers and Indigenous communities throughout the lake, the ministry makes recommendations to changes to commercial quota,” said Kowalski.

“If the Ministry analysis finds that Lake Whitefish recruitment has improved and abundance in this area of Georgian Bay has increased, we would re-evaluate the fall commercial fishing closure.”

It remains to be seen if there are other areas that will see closures as well.

“Lake Whitefish abundance has been on a downward trend since the early 2000’s in most commercial fishing areas of Lake Huron and in many areas, harvest is at an all time low,” said Kowalski.

“This is notable to the many fishers who make a livelihood from this industry and to their markets that rely on a source of wild caught Lake Whitefish.  This is particularly noticeable given those who commercially fish have experienced historic highs of Lake Whitefish abundance and harvest less than 20 years ago. The ministry will work with industry through these uncertainties and take necessary steps as needed to ensure conservation and sustainability of the fishery into the future.”