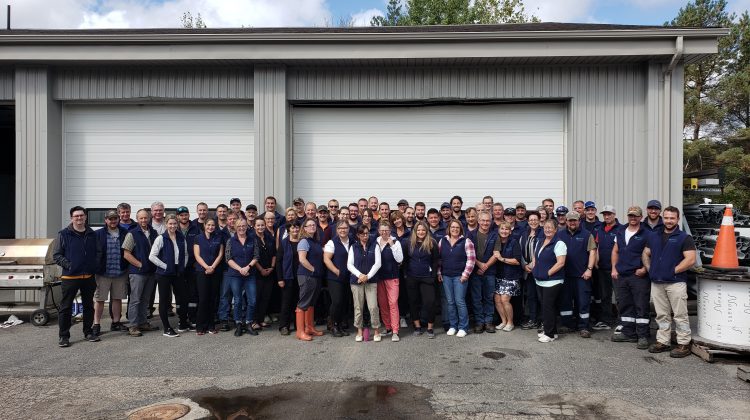 BRACEBRIDGE, ON- More than $4000 was given out in Muskoka on Monday afternoon.

The giving was orchestrated by local power conglomerate Lakeland Holdings, which includes Lakeland Power, Bracebridge Generation, and Lakeland Networks. The company had their team building day on Monday, with a total of 70 staff and 14 teams taking part.

Each team was given $250 to “pay it forward” in the area, heading out to give to individuals and organizations throughout the region.

According to Chris Litschko, Lakeland Holding’s CEO, the impact was widely felt.

“There were many hugs and kisses, and a few tears of appreciation throughout Muskoka, especially Bracebridge and Huntsville, and some (recipients) were surprised,” said Litschko, speaking to 99.5 The Moose on Monday.

“A lot of times, they’re overlooked for donations, so we got to some really key organizations. At least one recipient said they would pay it forward with their whole donation, and forward it to another organization they thought was more worthy.”

Litschko indicated that teams used their funds in a variety of ways, with some handing out cookies to passersby on the street, and some members giving some of their own money during the effort.

Eventually, they all came back together and voted on who had used their funds in the best way possible.

“The team that won had actually donated all the $250, and with an hour and a half left they went to a local retirement home and sat with some seniors,” said Litschko.

“In the beginning, there were six seniors they were sitting with, and by the end the whole room was full of seniors. They were asking the seniors how they paid it forward, in their earlier life.”

Litschko mentioned that the employees learned about the need for games and books in seniors homes.

Overall, he thanked them for their empathy and generosity.

“Paying it forward is not about money, but is about the act of giving, generosity, and kindness,” said Litschko.

“We live in a world of materialism, and people not interacting. For instance, we’re always looking down at our devices. An act of kindness should not be a surprise in today’s world, but it should be the norm.”