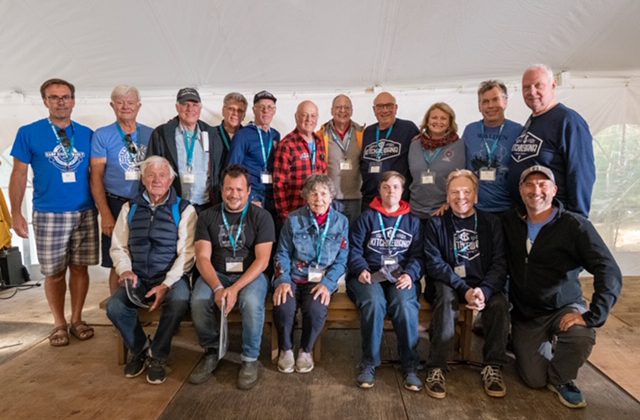 BEAUSOLEIL ISLAND, ON – 2019 has been a remarkable year for YMCA Camp Kitchikewana.

The camp celebrated its 100th anniversary this year, inviting alumni to revisit the revered summer camp on Beausoleil Island in Georgian Bay.

The YMCA Simcoe/Muskoka celebrated the camp’s anniversary from September 6th to 8th with visitors taking advantage of activities such as swimming, sailing, canoeing and kayaking along with usual camp activities.

A wall of distinction was unveiled honouring 20 camp alumni, featuring former camp directors, who had a profound impact on the camp.

Part of the ongoing legacy of the camp is an endowment fund of $940,000 which will be matched by up to $1 million with funds from philanthropist Paul Lawrence. The goal is $2 million and according to General Manager Gord Dunlop, the giving by Alumni is critical to the success of the camp’s future.

“We have been fortunate to have many people step forward and donate to the endowment fund because of what the Camp Kitchikewana experience did for them,” said Dunlop. “Community heroes like Paul Lawrence know how meaningful camp can be for a child and we are so thankful for his support and for the support of all our camp family and friends.”

Former camper Jennie Hughes-Meeker spent 11 summers at the camp and she has warm memories of what the experience did to shape her life.

“Camp Kitchikewana not only taught me many skills through a wide variety of activities, it was an invaluable opportunity to learn much more,” said Hughes-Meeker. “Camp taught me how to think independently, to respect and appreciate the beauty and heritage of the island, and allowed me to make lasting friendships with those who loved camp as much as I did. And, now 40 years later, I am still blessed to be spending time with my wonderful camp friends.”

Since it opened its doors in 1919, Camp Kitchikewana, with the generous support of alumni, has modernized its facilities, adding new cabins, washrooms, docks, sailboats, canoes and a state-of-the-art kitchen. Proceeds from the 100th Anniversary Endowment Fund will be used to enhance the camper experience including replenishing, replacing and repairing program equipment and facilities used by the campers.

For more information about YMCA Camp Kitchikewana, the 100th Anniversary Endowment Fund and how to donate, please visit www.ymcaofsimcoemuskoka.ca/ymca-camp-kitchikewana. Or visit the YMCA of Simcoe/Muskoka website for the full list of Camp Kitchikewana’s Wall of Distinction honourees.