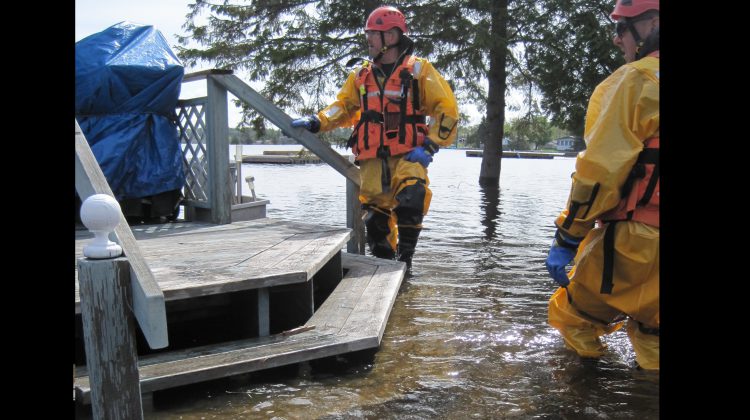 The flooding in French River is shown in a image supplied by the municipality.

PARRY SOUND, ON- The flood hazard for the District of Parry Sound is ongoing.

That’s according to the province’s Ministry of Natural Resources and Forestry. They’re advising residents in the West Arm area of Lake Nipissing, as well as the French and Lower Pickerel River Watersheds that the flood warning for the area has been extended until Friday, June 21st.

The ministry is keeping a close eye on the weather and watershed conditions.

The five day forecast for the area is calling for continuing rain today which will carry over into Saturday, with 20 – 30mm falling across the watershed for the two days.

The daytime temperatures Friday and Saturday will be below seasonal, with highs of 200c and lows of 120c. Beginning Sunday and into early next week, residents can expect clearing skies and warmer weather.

Lake Nipissing water levels are currently at 196.27m, which is above the Maximum ‘Non-Damage’ Water Level of 196.22. The inflows into the lake have continued to decrease, as such, discharge into the French River is being evaluated daily.

The lake is still highly vulnerable to rainfall events. Although the water levels and flows in the French River have continued to decline over the past week, they are still quite high.

As the lake and river have continued their downward trend, flooding is still occurring where homes and other infrastructure in low lying areas are already impacted.

Residents and municipalities in low lying areas and shorelines are encouraged to monitor conditions and prepare accordingly.

Shorelines and banks adjacent to rivers and creeks are very slippery and unstable at this time and, when combined with cold open water, pose a serious hazard.