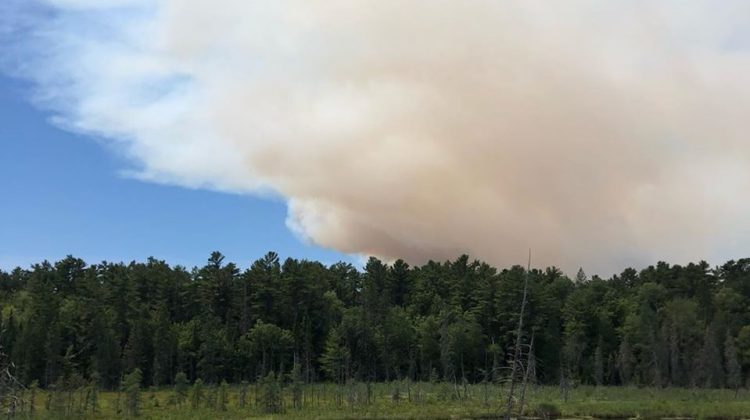 Photo of the Henvey Inlet fire provided by Jason Fox

The West Parry Sound OPP assisted in evacuating the Henvey Inlet First Nation. Mandatory evacuations have been put in place for locals who only have boat access in the geographic area of Georgian Bay east to Highway 69. This includes residents along the north and south shores of the French River, Pickerel River and Hartley Bay. Key Harbour and Killarney are also under states of emergency with mandatory evacuations happening. Road access residents in this area were given a 12-hour evacuation notice.

According to The MNRF, the fire is still blazing out of control at a size of 4,800 hectares. Shayne McCool of The MNRF says today’s weather will have an impact on the fire situation:

McCool says crews continue to try to push the fire back:

Drivers using Highway 69 can expect to see heavy smoke coverage along the road south of Grundy Lake Provincial Park due to ongoing efforts to suppress the forest fire. The OPP asks if you’re travelling, to avoid Highway 69 in the Key River and Henvey Inlet area. If you spot a forest fire south of French or Mattawa rivers this should be considered an emergency situation and you’re asked to call 9-1-1 right away to report it.